The times—are always changing. We are ever in a state of evolution. And advertising does not direct our evolution so much as reflect aspects of it. And sometimes quite vividly…

In 1969, the venerable Western Electric, one of the most respected companies of its time, issued a groundbreaking print ad with the shocking headline: “The Show Negro.” Shocking to our parents and grandparents in ’69 not because of the language of the headline so much as the blunt message in the copy:

We don’t hire black people for decoration.
We hire them for the same reason we hire white people.
To help us engineer, build and supply communication for the Bell Telephone System.
Not a novel idea. And it shouldn’t be. But it is why we have black supervisors, engineers and technicians, all over the country who are not window dressing.

The image in the ad is of a cardboard cutout of a black man propped in front of a chair at a very respectable looking desk. 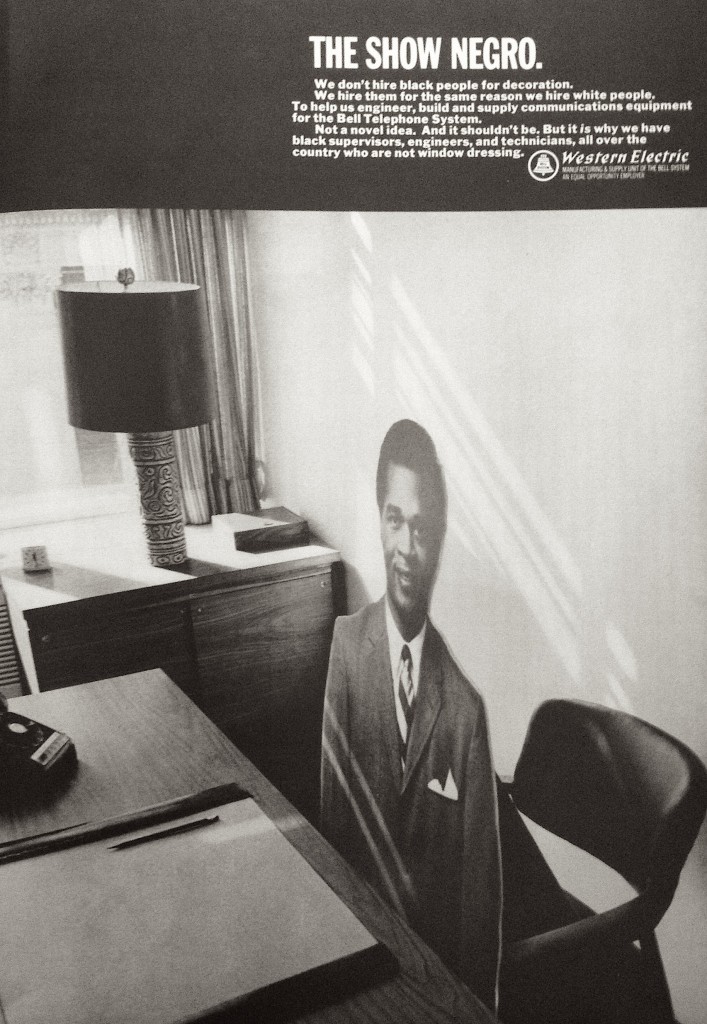 So as we recover from the discomfort that we would have that there was a time when we could say such things in a magazine ad, we should pay more attention to the idea that this company, as many are doing today, was cognizant of a major social transition taking place, and firmly established itself at the crest of this wave. Not simply because it was the right thing to do. But because they sensed that an increasing number of their younger audiences—believed in equality already, and were deeply distrustful of large corporations. “Never trust anyone over 30!” was the common saying at universities across the country. And this was one year after the assassination of Dr. King.

So, cause-related marketing and social-issues advertising is nothing new. And it is perhaps the best mirror of all for how society is changing at any given moment. Last weekend was the culmination of World Pride in Toronto, with millions converging on the city. Businesses ranging from Jack Astor’s (the TGI Friday’s of the north) to McDonald’s have outfitted their establishments in vivid rainbow colours, sometimes investing thousands of dollars per store to do so.

And for nearly 20 years now, companies such as Absolut and American Express have been advertising not only to the gay community, but have advertised their hiring and employee benefits practices, indicating that they do not hire “Show Homosexuals” (token gays) but rather, are progressive companies that reflect the evolving values of their target audiences.